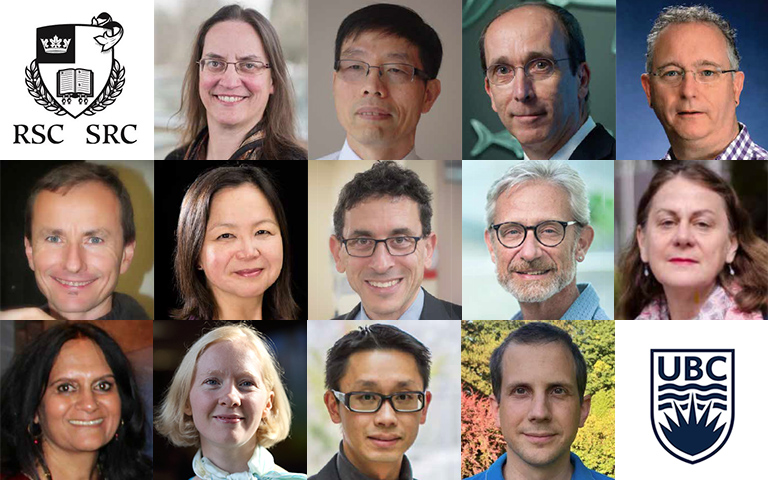 A total of thirteen UBC faculty members have been announced by the Royal Society of Canada (RSC) as new Fellows and as new Members of the College of New Scholars, Artists and Scientists.

Ten UBC faculty members have been named Fellows of the Royal Society of Canada. The fellowship of the RSC comprises over 2,500 Canadian scholars, artists, and scientists, peer-elected as the best in their field. These are distinguished individuals from all branches of learning who have made remarkable contributions in the arts, the humanities and the sciences, as well as in Canadian public life.

The 2022 Fellows and Members will be welcomed into the RSC in November, at the RSC Celebration of Excellence and Engagement.

Citations courtesy of the Royal Society of Canada

Dr. Barbara Arneil (Political Science, UBCV) is a world-renowned scholar of identity politics, feminist theory, and the history of political thought. Her research has forged innovative and enduring insights into the political consequences of imperialism, colonialism, and liberalism. Her pathbreaking research has exposed discrimination and oppression in Canada and the world by deepening the understanding of how and why so many people are excluded from politics based on gender, disability, age, ethnicity, and indigeneity.

Dr. Jiahua Chen (Statistics, UBCV) has made fundamental contributions to statistics, particularly in mixture models, empirical likelihood, sampling theory, and the design of experiments. His work on the extended information criteria shreds new insight into the variable selection when the number of predictors is comparable to the sample size. The result is particularly significant in the big data era. His works in mixture models are groundbreaking.

Dr. Villy Christensen (Institute for the Oceans and Fisheries, UBCV) is one of the most highly-cited fisheries scientists in the world today.  He is the principal architect behind the Ecopath with Ecosim ecosystem modelling framework and software, which is used by hundreds of scientists worldwide. His research focuses on ecosystem-based management with emphasis on human impact, food web effects, and environmental conditions including climate change – notably with focus on the balance between social and ecological tradeoffs in management.

Dr. Nicholas Coops (Forest Resources Management, UBCV) is Professor and Canada Research Chair (Tier 1) in remote sensing at the University of British Columbia. He is a global leader in using airborne technologies to understand forest structure and function, and how it impacts the overall Earth System across a range of spatial and temporal scales. He is highly cited with over 470 peer-reviewed publications and winner of numerous international and Canadian scientific awards.

Dr. Marcel Franz (Physics & Astronomy, UBCV) is a Professor of Physics at The University of British Columbia and a Deputy Scientific Director of The Stuart Blusson Quantum Matter Institute. Franz is a leading expert in theories of topological quantum matter, unconventional superconductivity and strongly correlated electron systems. Franz has received numerous awards and recognitions for his contributions including the A.P. Sloan Fellowship (2002), Killam Research Fellowship (2007) and has been elected Fellow of the APS (2014).

Dr. Kai Li (Sauder School of Business, UBCV) is the world’s leading expert in empirical corporate finance research.  Her groundbreaking critical analysis of corporate governance and innovation has transformed research on executive compensation design, shareholder monitoring, and corporate innovation. Her research on human capital and technological synergies in corporate takeovers has profound policy implications for fostering creative breakthroughs, while her pioneering approach to measuring organizational cultures has reinvigorated research on their influence on business decision-making.

Dr. Steven Miller (Pediatrics, UBCV / BC Children's Hospital) is a physician-scientist leader whose brain-imaging studies of critically-ill newborns identified the power of early-life intensive care unit experience to shape the trajectory of brain development through childhood. His findings led a paradigm shift from brain injury as a fixed-event to a focus on “everyday” interventions that he showed are modifiable to promote brain maturation across the life-course.

Dr. Fabio Rossi (School of Biomedical Engineering / Medical Genetics, UBCV) Professor Fabio Rossi’s innovative approaches to understand the cellular origins and differentiation capabilities of tissue-resident cells have opened up new fields of research. His work is recognized internationally for providing new strategies to treat chronic degenerative diseases such as muscular dystrophy. His efforts in the Canadian and international regenerative medicine community have catalyzed the creation of new interdisciplinary research clusters and advanced Canadian leadership in this important health research area.

Dr. Margaret Schabas (Philosophy, UBCV), a leading scholar in the history and philosophy of economics, has published three important monographs: one on William Stanley Jevons and the transition of economics from a literary to a mathematical discipline, the second on the concept of “the economy” and the belief that it is governed by natural and social laws and, most recently, the first monograph on the economics of David Hume.

NEW MEMBERS OF THE COLLEGE OF NEW SCHOLARS, ARTISTS AND SCIENTISTS

Dr. Kimberley Brownlee (Philosophy, UBCV) is the leading expert in two areas of moral and political philosophy: a) the philosophy of social human rights, loneliness, and belonging, and b) the ethics of conviction and civil disobedience. She is a Professor and Tier 1 Canada Research Chair at UBC and is inspiring a growing community of scholars to turn their collective attention to previously neglected problems concerning sociability, rights, and belonging.

Dr. Eric Li (Management, UBCO) is an Associate Profess and Principal’s Research Chair (Tier 2) in Social Innovation for Health Equity and Food Security at the University of British Columbia – Okanagan Campus. His research employed an interdisciplinary and community-based approach to addressing wicked problems such as health inequity and food insecurity. He actively engages trainees at all levels (undergraduate to post-doctoral) to co-develop innovative and community-centered solutions and initiatives to tackle societal and system-wide challenges.

Dr. Christoph Ortner (Mathematics, UBCV) has made fundamental contributions to atomistic and multi-scale modelling and simulation and their applications in materials modelling. The span of his achievements, from sophisticated mathematical theory to computational physics and chemistry, enhance our understanding of such natural objects. His use of machine learning techniques is exemplary. Ortner’s work is embodied in many highly cited publications and has been recognized through several international awards and editorial roles.